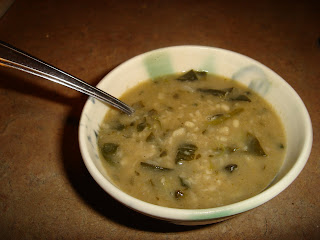 When I visited the Asian Supermarket in Albany a couple of weeks ago, I bought several bags of mystery legumes, including a 2 lb bag of urad dal. Urad dal is a type of bean product from India. Specifically it come from matpe peas. Matpe peas are small, round, black peas. When you split matpe peas and mill the black skin from them you end up small, cream-colored dried disks - urad dal.

I have never cooked urad dal before, so I did a little internet research before I started. I read that after soaking, urad dal would take about 3 hours to cook. That didn't seem possible for such little beans that looked a lot like lentils. I was very skeptical, but they did indeed take a very long time to cook. The soup I made this week used a couple of exotic ingredients, namely the urad dal and the Indian spice blend garam masala. Garam masala is a blend of ground Indian spices. Preparation and components vary; the one that I have contains coriander, red chili, cumin, clove, anistar, mace, fennel, black pepper, bay leaves, cinnamon, dried mango, salt, and clove leaves. If you get a chance to buy these 2 unusual ingredients, the soup itself was very simple and turned out well. 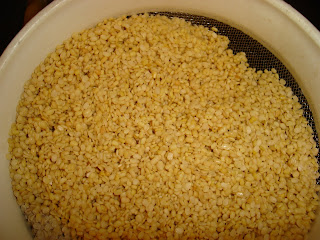 I started by heating some olive oil in my soup pot, while I chopped up 3 medium onions, 3 cloves of garlic and a 2 inch piece of fresh ginger. These went into the hot oil. I stirred them until the onions were translucent and then I threw in about 3 Tbs of garam masala - I'm not exactly sure because I didn't measure and for a while I feared I had used too much but in the end it turned out fine.

I stirred constantly while the spice was in the oil and it became darker and thickened much like a roux. I quicked added some water, my rinsed urad dal and then more water, reduce the heat and let the pot simmer. And simmer. And simmer. I stirred often, checking during every timeout in the men's NCAA basketball tournament game Kansas vs. Boston U. Even after my beloved Jayhawks were victorious, the dal was still not done.

When the dal was finally tender and the liquid thick - I added water a few more times - I added a large bag of frozen chopped spinach and a tsp of salt.

This soup has a thick consistency like runny oatmeal. In fact, it was really good for breakfast the next morning. 2 lbs of urad dal made a LOT of soup.

On Sunday at Bulls Head Friends Meeting we had our monthly potluck and program. I had enough soup that I heated half of it for the potluck and packaged the other half for Friends to take home.
Posted by Vonn New at 5:30 PM No comments: 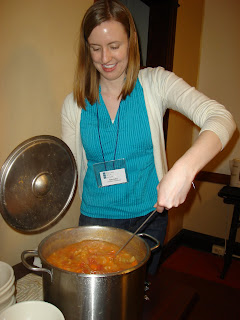 Last weekend, I traveled to Washington DC to work with one of my clients of my website design business. The William Penn House is a Quaker hostel and program center on Capitol Hill. I was delighted to discover that in addition to html and Drupal, there was also soup!

On the last day of my trip, William Penn House hosted a group of Friends from Friends House in Sandy Spring MD for lunch and I was invited to join in their meal of lentil-barley soup, homemade wheat bread, salad, and brownies. Faith made a huge pot of delicious soup. She cooked from a recipe from an Amish cookbook called Plain and Simple Cooking. The soup was rich, hearty and vegan. The barley gave it a wonderfully comforting texture. Faith used red lentils which disintegrated into the broth, as red lentils do, to blend with canned tomatoes and carrots and make a lovely bright orange color. 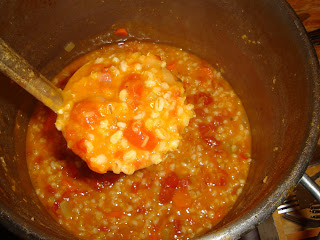 As you can see, everyone certainly enjoyed the lunch. If you want to give this soup a try but don't have the book, I found this recipe that looks pretty close. 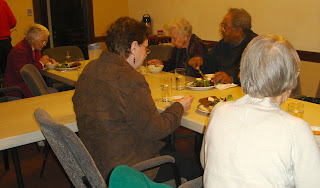 I close this week's blog post with a bit more on Radical Hospitality from Brad Ogilvie, program director of the William Penn House:

Our goal is to simply provide hospitality – a warm place where those gathered can share their hopes, dreams, visions. Among these are family and friends. We ask that people recognize that we do not seek to persuade people in any way. It is an exercise in hospitality – for us to be together, learn together and grow together. We will not agree on all things, and even where we might agree, we will not agree on how we get there. We do ask that we agree to listen to others, being free to speak our truth while welcoming others to do the same. It is out of this shared experience that we become better for having our time together. 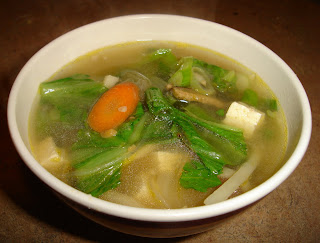 Truthfully, I usually make the soup on Saturday
so I can take it to Bulls Head Meeting on Sunday, but I was out having adventures yesterday, so I had to make a soup that was quick and easy enough to make this morning. I'm NOT a morning person, so the emphasis is on the easy. My adventures? A trip with friends to Albany NY where we took in a museum, ate at CCK my favorite Chinese joint in upstate, shopped at the fabulous Asian Supermarket where I turn into a total kid going nuts with all the novel smells, sights, and tastes, and then played drums at the Albany Dances for Universal Peace. Some of last night's purchases at the Asian Supermarket also inspired this soup.

One of the great things about miso soup is that is incredibly simple to make and yet has wonderful soothing complex flavor and is healthy too. I'm putting loads of stuff into this batch, but with the exception of miso, water, tofu and something green, everything else is optional. This is a great soup to play around with - pretty much anything light tasting will go well in miso soup. Some of the ingredients I put in this batch are shown in the picture below: scallions, Chinese mustard greens, bamboo shoots, red miso, bean thread noodles (shown in the package and soaking in hot water), dried shitake mushrooms, tofu, and carrots. 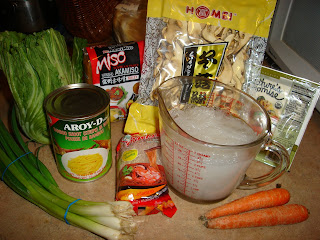 As you can see, the first thing I did was heat some water and soak 3 packages of bean thread noodles so they will become pliable. These noodles, are great for soup because they don't get mushy if they sit in liquid for a while. They are also called cellophane noodles because they turn clear which is just plain fun. I also like them for the Ministry of Soup because they are made from mung beans instead of wheat and so people who avoid gluten can eat them.

I chopped up some a large onion, some garlic, and fresh ginger and heated a couple of Tbs of vegetable oil in the bottom and my pot. I put in the garlic and onions first and when the onions were just starting to turn translucent, I added the ginger and stirred around well. I sliced 6 carrots, fairly thin and at an angle (looks cool and cooks faster) and threw them in too. 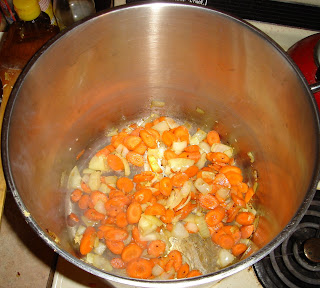 When the onions were cooked, I added 4 quarts of water and a generous handful of sliced dried shitake mushrooms. I let it heat through to finish cooking the carrots and soften the mushrooms while I went to work cutting up other stuff: a pound of extra-firm tofu was cut into small cubes; a head of Chinese mustard greens was sliced fairly coarsely; the bamboo shoots were already julienned so all I had to do was open the can and drain them. The most fun was cutting up the bean thread noodles. Technically, you don't have to cut them up but it will make it much easier for me to dish up helping for Friends to take home if I don't have to deal with loooooong noodles, so I drained them from their soaking water and them cut the whole mess into a checkerboard pattern. Why was this fun? They make the coolest sound when you cut them - kind of a squeaky, squishy, squick sound. You have to try it for yourself. 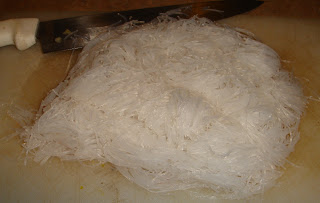 When the carrots were cooked (I tested them by biting one), I added the rest of the ingredients in this order: bean thread noodles, the bamboo shoots, miso, Chinese mustard greens. It's important to notice that I put the miso in at the end. It's a fermented soy product that is rich in beneficial (probiotic) micro-organisms. They can stand to be hot, but you don't want to cook them much or you'll kill the probiotics. It will still taste good but won't be quite as healthy. Miso has a consistency like peanut butter, so after I added about 4 Tbs, I stirred it well to melt and dissolve it into the broth. I also put the mustard greens in late because I wanted to just wilt the green leafy part but leave a bit of crunch in the midrib.

I turned off the heat but still wasn't done. I seasoned the soup with a splash of soy sauce and sesame oil. Threw in a handful of dried wakame seaweed, which hydrated immediately, and finally topped it off with the sliced scallions. Now, it's done. Just in time to get to meeting....
Posted by Vonn New at 1:53 PM 2 comments: