In honor of Passover, this week I made 2 different soups with matzoh balls. The first is a vegetarian matzoh ball soup chock full of vegetables that I shared with Friends at Bulls Head Meeting on Sunday. The second is a slightly more traditional chicken matzoh ball soup that was the opening course of a Seder I hosted in my home on Monday evening.

I began the whole project on Saturday by making a huge batch of matzoh balls. I used Streit's matzoh meal and doubled the recipe on the back of the box. I started by beating 8 whole eggs, 1/2 cup of olive oil, and 1/2 cup of water together, seasoned with a liberal shaking of Adobo seasoning. 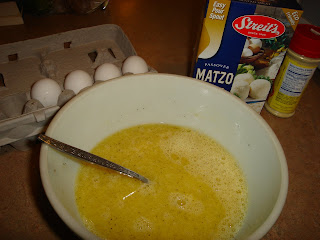 I added 2 cups of matzo meal and mixed well. 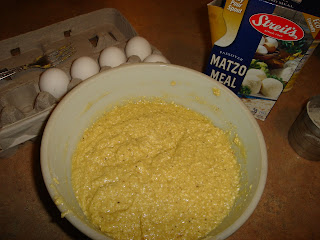 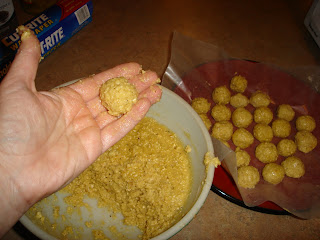 The matzoh balls went back into the 'fridge to rest while I made the rest of the soup.

As I often do, I started by mincing some garlic and chopping a couple of onions, a bunch of celery and 4 large carrots. I heated a bit of olive oil in my soup pot and added the vegetables. While they were cooking, I chopped up a small head of cabbage, then added that. 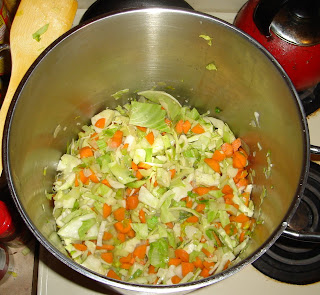 I added 3 quarts of water and 2 large cubes of Knorr vegetable bouillon and let the soup simmer until the carrots were done. Then, I added a pound of fresh sliced mushrooms, a bag of frozen peas and a bag of frozen mixed vegetables. 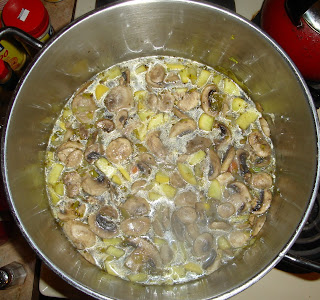 I brought the soup to a boil and then dropped in half of the matzoh balls. I covered the pot and let them cook for about 20 minutes.

The other half of the matzoh balls went in the freezer for Monday's soup.

It is said that there are 2 kinds of matzoh balls - sinkers and floaters. These were somewhere in between - a little too heavy for my taste. I prefer my matzoh balls more fluffy than these turned out though some people like them more dense.

On Monday, I made another batch of soup - this one by boiling some chicken leg quarters for broth and then adding onions, carrots and celery. I seasoned the broth with pepper, salt, and Bragg Liquid Aminos. After picking the meat off the bones and adding it back to the broth, I brought it to a rolling boil and added the matzoh balls from the freezer. I was so happy and excited when they floated to the surface and became fluffy! As I dished up the soup during the break in the Seder, I garnished each bowl with freshly chopped parsley and green onions.
Posted by Vonn New at 3:45 PM No comments: