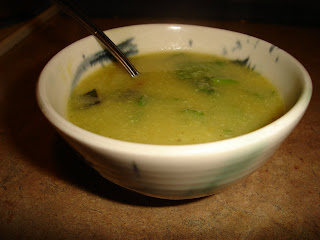 The growing season has returned to the mid-Hudson Valley! Here in Hyde Park, both my local farmers market and Hearty Roots CSA are back in business as of this week. That means that my soups will start to include these lovely fresh, organic ingredients straight from the farm. If you also receive a weekly farm share and aren't always sure what to do with your produce, this might be a good place to follow along as I cook with my farm share too.This week's soup features a puree of cauliflower and potato along with some of the early season crops from my farm share, Japanese turnips and green garlic.

I began by chopping a large onion and sauteing it in olive oil in the bottom of the soup pot until it was translucent. While it was cooking, I washed and cut into chunks a whole cauliflower, 5 white potatoes and the roots of 6 turnips. I saved the green tops for later. 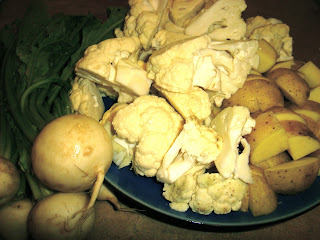 One of the more unusual vegetables in my farm share this week was green garlic. The immature bulb of the garlic is milder than a mature bulb. The green leaves remind me of leeks. In the center is the flowering stalk called the scape, which is full of garlic flavor with bright green overtones and a snappy texture on the teeth. 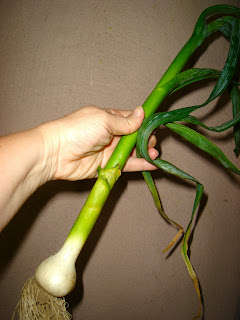 I cleaned the garlic, trimmed the end of the leaves, removed the fibrous center stalk and chopped the rest. Then I sauteed it in a bit of olive oil until it was tender and set it aside. 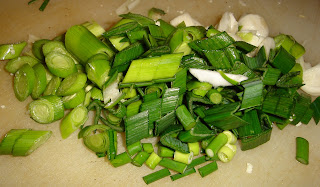 When the cauliflower, potatoes, and turnip roots were tender, I turned off the stove and let them cool a bit. I borrowed my landlady's immersion blender and I've learned my lesson in past soups about splattering molten vegetable purees around the kitchen. As soon as it was down to a safe, but still warm, temperature, I pureed the contents of my pot until it was smooth. 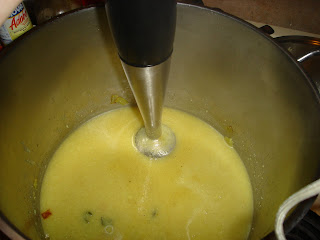 With the soup rich and smooth, I returned it too the heat and washed and chopped the tops of the turnip greens. 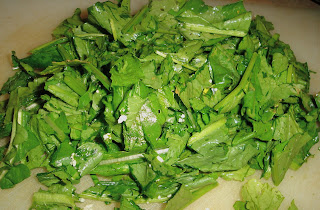 I finished the soup by stirring the turnip greens and sauteed green garlic into the pot. The greens cooked in just a couple of minutes. The garlic and Indian spices are so fragrant - this soup smells as good as it tastes.
Posted by Vonn New at 2:03 PM 1 comment: 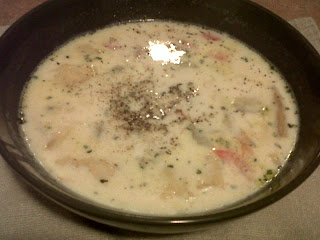 I just spent the last 3 weeks visiting family and friends in Florida and on my way home I stopped to visit friends in Gainesville. Scott Jones sent me home with a 10 lb bag of lovely potatoes. Jan & Alan Zak sent me home with a couple of giant Vidalia onions & 3 sweet watermelons. I decided to only use the potatoes & onions for soup.

This week's soup is a 'creamy' potato soup with homemade dumplings. I put creamy in quotations because I made a condensed version of the soup that is dairy-free and thickened with mashed potatoes instead of cream. I sent it home with Friends from Bulls Head Meeting with the instructions to thin the soup with milk, soy or rice milk, or some kind of broth.

I began the soup-making by heating some water and soaking a handful of dried shitake mushrooms. Both the mushrooms and the soaking liquid, which becomes a wonderful mushroom-flavored 'tea' will find their way into the soup. 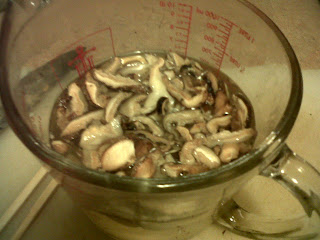 I washed, but did not peel, about 5 Yukon Gold potatoes. These will later be mashed for the 'creamy' part of the soup. They went onto the stove in a pan of water to cook until soft. 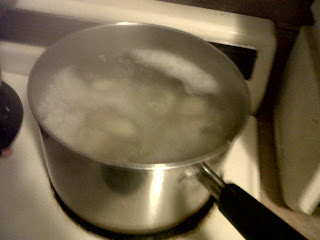 I chopped the Vidalia onion, 4 carrots and 4 stalks of celery and softened them in olive oil in the bottom of my soup pot. This is what culinary professionals call, mirepoix, and it forms a flavorful aromatic base for building the soup. 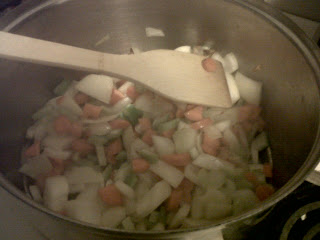 I chopped up more potatoes - an assortment of red, blue, and white-skinned, these into smaller bite-sized pieces because they will stay as chunks in the soup, added them to the mirepoix and covered the whole mess with a couple quarts of tepid water. I used tepid water instead of hot water because it helps the potato pieces maintain their shape and structure if you bring them up to cooking temperature gradually rather than all at once.

The soaked softened dried shitake mushrooms were already sliced so all I had to do was throw them into the pot. I added the soaking liquid when the soup looked like it could use some more water. For protein, I cut up 2 cakes of dried, spiced tofu into small pieces and stirred them into the soup. This is a product that I picked up at my local Asian grocery store. It's very versatile and lasts a long time in the refrigerator, perfect to pull out whenever you want to add a bit of protein to a dish. 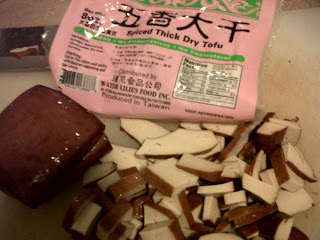 To make the soup extra hearty, I made some hand-formed egg noodles and dropped them into the simmering broth. I've always made these and didn't really remember where I learned them until spending time with my 98 year old grandmother, Dot Cesky last week. She pulled out a recipe for spatzle from her Czech mother-in-law that includes a bit of nutmeg in the dough. My noodles very much resemble this spatzle, so this time I tried adding nutmeg and it was a nice note. I beat 2 eggs with pepper, Adobo seasoning and nutmeg. Then a little at a time, I add all-purpose wheat flour until it forms a stiff dough. When it's stiff enough to handle, I powder my hands with flour, pick up the ball of dough and pinch off morsels and drop them into the simmering broth. I'm quite sloppy with this process on purpose, because little bits of flour that fall into the broth help thicken it and I'm going for a thick, condensed soup.

When all the vegetables and the noodles were cooked - just a couple of minutes, I poured the water off of my first pan of potatoes (if I needed more liquid for the soup, I would have poured it in, but my pot was in danger of overflowing). I mashed the potatoes with an old fashioned hand potato masher and gently stirred it into the soup. As the heat worked on the mashed potatoes, the soup became a true 'condensed' soup, very think and ready for garnish and thinning. In the photo at the top of this post, I have thinned the soup with 1% milk and garnished it with pecarino romano cheese and black pepper. 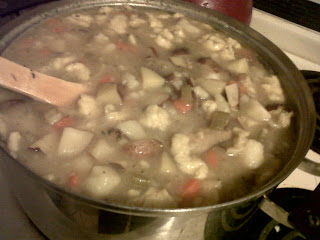