The blog's been on hiatus for a few months while I concentrate on my web development business and keeping my affairs of daily living in order, but today, in honor of Maurice Sendak, I bring you Chicken Soup with Rice. (Vegan friends, you will probably want to stop reading right about now).

This 'chicken soup with rice' is more accurately a chicken congee. A congee is a thick, soft, hearty rice dish that is eaten in almost every culture - especially in Asia. If you haven't encountered congee before, think of it as the peasant version of risotto, without the cheese. Congees are often served to people who are recovering from illness because they're easy to digest and are also eaten for breakfast because of their simplicity. 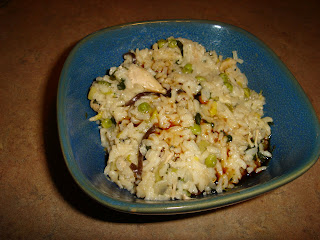 It's a great way to get a lot of food out of a small amount of protein. I've been living on a very low budget lately and so when I buy something like a whole chicken, I want to get as many meals out of it as I possibly can. On Saturday I roasted the chicken in the oven and spent several days slicing off the meat and enjoying it with mushrooms, vegetables, and in sandwiches. By Monday, I was ready to make a congee.

If you need to get the most out of your food money, never throw away the bones and what's left after you pick off the meat. Put them in a pot of water and simmer them into a broth. If you store your cooked chicken on a plate in the fridge like I do, you'll also find some gelatin on the plate. Put that in! It's the good stuff.

After you've simmered the remains of the chicken for an hour or 2, use a slotted spoon to get all the parts back out of the broth. Put it on a plate and let it cool. Chop up an onion and some celery and throw it into the broth. Throw in some frozen peas. I had some leftover mushrooms and I also added some dried shitake and tree ear mushrooms. Now add some rice. The idea is to cook the rice so it absorbs most of the liquid but is still soft and squishy, so the way to go about this is to estimate the volume of liquid you have and then add about 1/3 of that in rice. In other words, if you have 6 cups of broth, you should add 2 cups of rice. You don't need to be very precise about it, just eyeball it and make a guess. You can always adjust later. If the liquid is mostly absorbed but the rice is still firm or crunchy, add some water. If the rice is soft but there's still a lot of liquid, call it soup and enjoy it as it is.

Let it cook on low heat, uncovered, stirring occasionally. When it's almost done (taste it, the rice will be al dente at this point), throw in leftover cooked vegetables. I like to add frozen greens (any kind you like) at this point. Pick through the chicken parts and throw any bits of meat you find into the pot.

Season with soy sauce, black pepper and Sriracha sauce. This is great to store in the refrigerator and heat up for a quick simple meal.
Posted by Vonn New at 11:54 AM